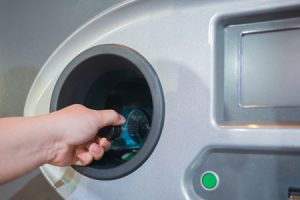 Coca-Cola is particularly interested in using its reverse vending machines to encourage recycling at music festivals and other outdoor events where large quantities of bottled beverages are consumed. They’ve even suggested offering VIP benefits to fans who use their recycling centers at these events. Coca-Cola North America is currently in the process of deploying reverse vending machines at retail locations in the United States and Canada as well.

This program constitutes just one part of Coca-Cola’s ambitious World Without Waste initiative, which aims to “collect and recycle the equivalent of every bottle or can it sells globally by 2030.” In addition to creating its own recycling centers, the company is also working to develop 100-percent recyclable packaging and reduce the amount of plastic that is used to make its bottles.

Keep an eye out next time you buy a bottle of Coke from a vending machine—there could be another machine waiting to take your bottle back nearby!